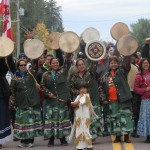 Women Drumming for the Water

“Rexton, NB” unceded Mi’kmaqi – On “Colombus Day”, a day which celebrates 521 years of genocide and oppression of Indigenous peoples, the Mi’kmaq Warrior Society has released the following video call for support. Suzane Patles, an Ilnu woman and member of the Mi’kmaq Warrior Society calls for physical support at the blockade, solidarity actions across Turtle Island on Oct. 18th and a flooding of Kanadian official representatives’ phone and mail lines. The October 18th Day of Action is a response in protest to the court injunction that SWN is looking to serve against the encampment. Organize an action in your community, use #INDIGENIZE and send us a write up with photos to post online: reclaimturtleisland [at] gmail [dot] com.

The compound, where SWN has over hundreds of thousands of dollars in equipment, has been shut down and their equipment seized by local Indigenous peoples. Patles is among many Wabanaki Confederacy peoples asserting their inherent and treaty rights and titles over their territories at an active road blockade since Sept 28th. The HWY 134 blockade is preventing SWN equipment from illegally excavating Mi’kmaq territory and conducting seismic testing in order to begin the process of hydraulic fracturing, or fracking, on unceded native lands.

The road blockade has been estimated to cost SWN over $60, 000 a day. Due to the recognition of Indigenous inherent and treaty rights and title, the RCMP have been hesitant to interfere with the blockade though not without conflict. The blockade site has the support of Wabanaki Confederacy traditional governance, and widespread community support amongst Indigenous and settler groups. Flood colonial government mail and phone systems with statements of support for the blockade including the demands of the Mi’kmaq Warrior Society. The Warrior Society has issued the following demands to New Brunswick Premier Alward:

8 thoughts on “NO THANKS NO GIVING: MI’KMAQ CALL FOR ACTIONS OCT 18TH #INDIGENIZE”