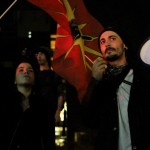 Mateo Du Pekuakami has been released from the custody of the Israel police and has been banned from the West Bank. Fellow arrestee, who is European, has been charged with assualting a police officer. An account from the International Solidarity Movement can be read here. More details to come.