Reclaim Turtle Island is dedicated to spreading the word on the Indigenous Insurrection in 2014, and we look forward to continue to lift up one another’s voices on the frontlines against colonial-capitalism, reservation apartheid and industrial genocide. Please support our crowdfunding initiative so we can get the basic equipment needed to continue to produce Indigenous-led grassroots media, and continue production on several exciting upcoming projects.

All across Turtle Island and around the world Indigenous peoples are taking direct action to protect their lands by any means necessary. Together we are resisting colonialism by defeating corporate Imperialism, preventing resource extraction, asserting our sovereignty, and fighting White supremacy and legacies of racism. So much has happened and Indigenous peoples are rising up!

Below is a brief synopsis of Land Defense and Sovereigntist struggles across Turtle Island that burned bright this 2013. It is in no particular order and by no means complete. From disrupting tar sands megaloads and pipelines infrastructure, to mining blockades, logging blockades, kicking out Nazis, rescuing our kidnapped children, continued Idle No More demonstrations and reclaiming territories, our spirits of survival and responsibility are so strong.

If there is one thing we can take away from 2013: everywhere our people are fiercely fighting colonial expansion and resource extraction. We are rejuvenating our cultures, our languages, and our lifeways. It is through asserting our relationships to our territories that we gain strength. #2014WarriorUp

Special shout out to Warrior Publications for cataloguing so much of our peoples’ resistance.

Algonquin’s of Barriere Lake erect Land Protection camps to stop logging and deforestation in their unceded territories. Algonquin peoples haulted logging equipment and forced the occupying government body (Quebec Ministry of Natural Resources) to stop development as they continue to monitor their territory and seek to hold the illegal colonial Ministry accountable.

#Elsipogtog blockades against SWN, explodes in RCMPig raid, unites Mi’kmaq, Wolastoqiyik (Maliseet) and settlers against fracking. Mi’kmaq erect rolling blockades (3 separate highways), seize seismic testing equipment, and continue anti-fracking resistance. Oct. 17th RCMPigs raid the site, video here. Court Updates: 6 Warriors were held without trial, as Prisoners of War, and were  assaulted by police and put into solitary confinement. 2 received bail. Of the remaining 4, Coady Stevens plead guilty to 1 count assault police, 2 counts obstruct police and 1 count of uttering threats to an officer and has been released. Jim Pictou also entered a guilty plea for 1 count each of uttering threats to officer, mischief, not keeping the peace, obstruction at large, assault with bear spray, and uttering threat to a police dog and has been released. Aaron Francis and Germain “Junior” Breau have entered not guilty pleas to 16 and 19 charges respectively. They have both been denied access to spiritual practices and Junior has been targeted for solitary confinement. Trials coming this spring.

Lubicon Cree tell Penn West Petroleum to frack off. The Cree of Lubicon Lake enforced their Laws against PENN WEST PETROLEUM LTD on an oil lease site located in their territory by occupying a nearby access road.

Red Lake Chippewa Blockade Enbridge Pipeline.  Nizhawendaamin Indaakiminaan, a group of grassroots Anishinaabe from Red Lake and supporters, occupied land directly over multiple Enbridge pipelines operating without permits on Red Lake lands in occupied-Minnesota, and demanded that the flow of oil through these pipelines be stopped.

Direct Action Shuts Down First U$ Tar Sands Mine in the occupied territories of Utah. Dine’ Land Defenders, Lakota Warriors, and supporters, including a Land Defender of the Yagua Nation, shut down the tar sands mining site in so-called Utah, and the corporation’s (U$ Oil – actually a Kanadian company) stock dropped 13% on day of action. Footage from this action is featured in our film Kahstastenhsera. @uneditedmedia @peacefuluprising  . Dine’ land defenders are working towards a sovereignty camp, you can support this initiative here.

Tahltan Protect Sacred Sites and Takeover Mine to Shut Down Fortune Minerals.  Members of the Tahltan Nation order workers off of a Sacred Site being explored for the purpose of exploitation and desecration by Fortune Minerals. Tahltan peoples, lead by Elders part of the Klabona Keepers, take over the site, protecting their Sacred Headwaters and establish a blockade to prevent illegal mining of their territories. For more checkout: http://skeenawatershed.com/ , http://sacredheadwaters.ca/ 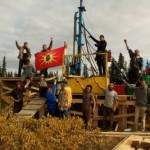 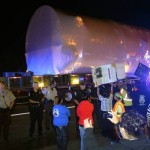 Sinixt Nation assert their sovereignty in the face of colonial erasure. Sinixt Nation establish a reclamation site for cultural practices and call for support in the wake of Colonial forces denying their existence and occupying their territories. Full statement from the Sinixt Nation. Check out: http://sinixtnation.org

Lakota & Dakota Grandmothers Kick Out Nazi Scumbags! Hundreds of Lakota & Dakota peoples and their supporters lead by Grandmothers asserted their sovereignty by protecting their territories from White supremacists in a small-settler town outside of the reserve. Stand off between Warriors and Grandmothers against members of the Nationalist Socialist Movement resulted in the confiscation of the Nazi flag and continued confrontations to squash Nazi scumbag organizing on stolen lands! Full story. 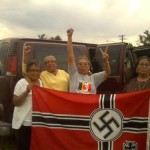 Gitga’at First Nation evicts Northern Gateway crew conducting spill response survey.  An Enbridge survey crew trespassed on Gitga’at territory, and after a meeting were told to leave.  Members of the Gitga’at Nation have said they will not allow tankers to pass their territory.

Anishinaabe of Aamjiwnaang disrupt pro-Tar Sands Conference and stand up against the “Chemical Valley”. Lead by Anishinaabe-kwe’s, youth and Elders, Aamjiwnaang community members and supporters rallied against environmental racism, standing up against new development in the “Chemical Valley” and shut down the  pro-tar sands conference. Support: http://aamjiwnaangsolidarity.com/

Inuit of socalled Labrador oppose Hydro Project, arrested asserting Sovereignty.  Eight Inuit people including elder James Learning were arrested for asserting their inherent responsibilities over their traditional territories.  They are fighting the Muskrat Fall Hydroelectric project that will disrupt their hunting, fishing, and trapping grounds.

Dakelh people from Ts’il Kaz Koh First Nation (Burns Lake) blockade Band Office, evicted by RCMPigs.  Three adults and one child were removed from the Burns Lake Indian Band offices by 50 RCMP officers with shotguns and riot gear. The protesters had blockaded themselves in the building after hearing of shady financial transactions by local Indian Act Officials.

Attawapiskat launches multiple fierce and effective blockades against De Beers Diamond Mine, causing “irreparable financial damages”.  Anishinaabe community members of Attawapiskat hit De Beers mine with a road blockade, and another blockade shortly after in order to halt operations and stop the exploitation of their lands and peoples.

#INM National Day of Action springs multiple rail blockades across Klanada. Border crossings, passenger train and commercial freight lines were stalled, blocked and halted by Indigenous peoples from across Klanada as part of Idle No More calls to action.

Haudenosaunee from Six Nations of the Grand River embark on caravan of protection, hitting over half a dozen wind turbine sites, asserting themselves over their treaty territory. Six Nations community members stood up against illegal development their territory, as a wind-turbine companies (NextEra Energy Kanada and Capital Power Corp) displaced the nest of an Akwek’s (Eagle) family.

Grassy Narrows community continues to fight logging, mercury poisoning, & more. A march lead by Grassy Anishinaabe-Kwe’s  raises awareness about violence against Indigenous women, as the community celebrate the 11th anniversary of the clearcut blockade and continues campaigns of resistance against new plans to resume clear-cut logging in their territory. Support: http://freegrassy.net

Racist newspaper letter sparks protest and backlash in occupied Suneymuxw territory, socalled Nanaimo, BC.  The Nanaimo Daily News posted a racist letter laced with hate speech and ignorance against Indigenous peoples.  A protest lead  by Suneymuxw First Nation people and supported by the community demanded the firing of the paper’s Editor and a front page apology.

Innu continue resistance to Plan Nord, maintain blockades and plan for future actions. People of the Innu Nation continue to protect Nitassinan, their traditional territory, against Quebec plans for energy infrastructure including hydro dams which will devastate the natural balance of the lands, waters and impact the practices of traditional lifeways.

Journey for the Earth Walkers embark on A Sacred Journey for Future Generations, follow the Nuclear Cycle. Cree, Dene, Metis and Anishinaabe walkers joined at different spots along the route and continued on deliver notices to GE-Hitachi, walk the nuclear fuel chain to stop uranium use. Support: Journey for the Earth

Aamjiwnaang 13-day rail blockade against CN rail. Just slipping into 2013, Kanadian National railines suffered financial loss as the Anishinaabe of Aamjiwnaang First Nation established a rail blockade as part of Idle No More, asserting their sovereignty and resisting the exploitation of Kanadian occupation and the impacts of Chemical Valley on their lands and peoples.

Dine’ peoples stand strong to protect their Sacred Sites and confront PeaBody Coal Mine from exploiting their lands and peoples. Several were arrested in street confrontations, including banner drops, at the PeaBody AGM as Dine’ (Navajo) community members from Black Mesa, joined by several groups of supporters condemned the PeaBody operation in support of Indigenous self-determination. Demonstrations were also held to further condemn PeaBody Coal’s desecration of Burial Sites on Black Mesa, as well as ongoing campaigns to Protect the Sacred Peaks, to keep the ban on Uranium mining & push for cleanup, as part of the legacy of continued resistance against ongoing land theft within Dine’tah. Support: http://indigenousaction.org, http://protecthepeaks.org, http://supportblackmesa.org,

Kanien’keha:ka of Akwesasne takeover U$ / Kanadian border bridge in opposition to fracking. Kanien’keha:ka community members of Akwesasne seized a border crossing, firmly asserting their sovereignty in the midst of Imperial borders, sending a strong message to colonial occupiers about burgeoning Haudenosaunee resistance to fracking on our territories.

#Oct7Proclaim Idle No More Day of Action sparks over 50 actions globally. Including rallies, highway blockades and the delivery of an Eviction Notice from Mi’kmaq Warriors  to SWN headquarters to occupied Houston, TX, actions ignited across Turtle Island in spite of the 250 years of the Crowns colonial lies.

Moccasins on the Ground, Direct Action training camp in Lakota territory.  Lakota warriors, community members and supporters participated in training communities along the Keystone XL pipeline route. Everyone was encouraged to warrior up for Unci Maka. The Lakota have made it clear TransCanada is not welcome on their Treaty territory.

Campaign against racist slurs puts the R-word under heat. Across Turtle Island rallies of hundreds of people have come together to protest the continuation of the use of the R-word in football and sports teams. One such campaign was successful in occupied Algonquin territories, of so-called Nepean, ON where DJ NDN from A Tribe Called Red was successful in pressuring a name change of the local football team. 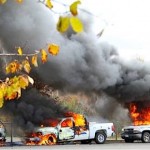 3 thoughts on “A Look Back: Indigenous Resistance in 2013”