Anishinaabeg and fellow Energy East pipeline resisters made a presence inside and outside Lakeside Inn on Tuesday, Aug. 12 for TransCanada’s second Kenora, Ont., open house 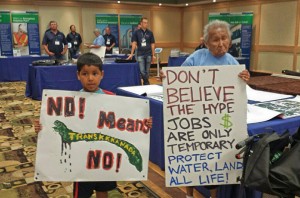 This time, the people weren’t interested in hearing TransCanada’s “information session” pitch.    The tradeshow set-up had booths, corporate fact-sheets, and enough staff for one-on-one interactions to keep concerned citizens unaware of each other’s objections to the proposed Energy East pipeline.

Many in attendance had already made up their minds against the Energy East project proposal to convert the 50+ year-old natural gas carrying “Canadian Mainline,” and build new pipeline sections, into what could be North America’s largest tarsands pipeline, with 1.1 million barrels of diluted bitumen per-day from Hardisty, AB to marine terminals at Saint John, NB for international export.

Kenora Transition Initiative, 350.org, and Kenora community members began with a picket across the street from the Inn, with signs and leaflets to counter TransCanada’s.

But, after two patient hours outside the hotel, Anishinaabeg led the walk inside with song and did not allow TransCanada reps and contracted Garda security to take their signs away.

“I’m here to speak for my children and my grandchildren and there’s not going to be any oil going through this land, even when I die my kids are going to stand up after me, and that’s it, no pipelines,” first announced Shawanoong Noodin Ikwe (Chrissy Swain) of Grassy Narrows to the captive audience of TransCanada staff.

Morrison later turned to her comrades: “As Anishinaabe people we have to stick together…keep in touch…we have to work hard to try and prevent that pipeline from going through.”

“Gary” responded to the women, “Thank you for coming…we’re interested in talking to you and providing information,” Winnipeg’s Lorraine Clements interjected, “Your information is lies…you’re not listening to the women…”

VIDEO: TransCanada’s Gary spoken to by the women

Swain directed an assertion to TransCanada staff: “You are not welcome here on Treaty 3 territory.”

“There is a genocide that is happening to our lands, that you are a part of destroying”, exclaimed Jo Seenie, of Roseau River whose kids are from Shoal Lake 40. “You guys (TransCanada) think momentarily all the time, why?…and we’re tired of being sold out…shame on all of you for sitting here talking like it’s normal to rape the land.”

Seenie who vocally shut-down Phil Fontaine’s speech at the University of Winnipeg in Janurary vowed to keep speaking out and put her life on the line in order to stop the project. Fontaine’s consulting group Ishkonigan is contracted by TransCanada to engage with 185 first nations communities along proposed corridor.

TransCanada expects to file it’s regulatory application to the National Energy Board this September before it can be approved.  The company aims to have the pipeline pushing diluted bitumen by 2018.

VIDEO: “The Water Song,” sung inside the TransCanada open house