Grassroots Indigenous People say they will be the ones to decide if Tarsands Oil can cross their Territories. 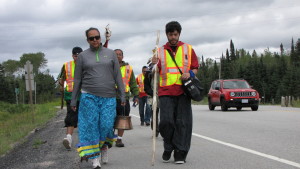 Kenora—Today is day 5 of the Anishinaabe Water Walk, and already more than 40 walkers have covered 100 km of the route that TransCanada wants to use for the Energy East Pipeline project that will pump tarsands bitumen through a 40 year old gas pipeline where it crosses and threatens more than a dozen waterways in Treaty 3 Territory. The Anishinaabe Water Walk, organized by Grassroots Indigenous Water Defence (GIWD), will pass through downtown Kenora today, and will be joined by supporters for a rally at Market Square at 3pm, and will then march through the streets of downtown Kenora to McLeod Park for a community meal, from which the Water Walker 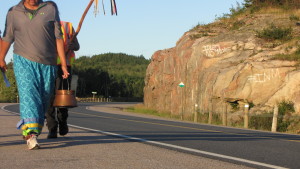 s will continue to their final destination at Shoal Lake 39 on Saturday.

Fawn Wapioke is Chief of Iskatewizaagegan (Shoal Lake 39) First Nation and a mother who has been one of the lead walkers since Sunday. “The bravery and the strength of our young people, Elders, men and women in collectively opposing the proposed Energy East project is admirable,” she says.

“The walk has created awareness, unity, and a stronger connection to one another as well as to the lands, waters, and to our responsibilities as the Anishinaabeg who are indigenous to this territory,” says Wapioke.

With the Federal election campaign having commenced, and with TransCanada pushing ‘divide and conquer’ “communication and engagement funding agreements” (CEFA)  on cash-strapped First Nations revealing a deeply flawed consultation framework, grassroots Indigenous voices that can hold government accountable to Treaties that affirm inherent Indigenous rights are positioned as a powerful voice against. Supporting those grassroots Indigenous voices right now is one of the most effective things the climate movement can do to challenge Canada’s environmentally destructive and backwards energy strategies.

“The CEFA consultation deals that TransCanada is using to manipulate First Nations Band Councils and Treaty advocacy groups exemplify the way that the Federal Government is devolving their fiduciary and legal obligations like the Duty to Consult with Indigenous Nations to giant corporations—the very people who stand to profit from these environmentally destructive projects,” says Clayton Thomas-Muller, Indigenous Climate Campaigner for 350.org, who has been on the Walk for its entirety.

“The Anishinaabe Water Walk in Treaty 3 Territory against the path of the Energy East Pipeline project is one of the most important grassroots initiatives to support in this major fight to protect our water, land and collective rights against the agenda of big oil and the Harper government,” says Thomas-Muller. “It will be up to those grassroots voices to decide whether or not this and other similar projects are actually allowed to be completed,” he says.

Today’s rally and march are organized by Transitions Initiative Kenora (TIK) in support of the Anishinaabe Water Walk.

“It is startlingly clear that we are at a breaking point environmentally; not only our water, but all it is connected to is at risk,” says Ashley Bennet, a member of TIK.

“The Indigenous Women who are leading the Water Walk are our teachers, our leaders, our inspiration; they are where my hope lies and my support lands,” says Bennet. “These women are forging a new path which they are challenging us all to follow; a path that calls us to change the direction of thinking in Canada,” she concludes.

Grassroots Indigenous Water Defence (GIWD) was founded in 2014 by Anishinaabe Women from Treaty 3 communities as a response to the threats posed by TransCanada’s Energy East Pipeline project. The fight against the pipeline and the initiative taken by GIWD is just one example of grassroots Indigenous People taking bold new actions to protect water and land from destructive industrial development, for future generations.