TransCanada, one of the key proponents and benefactors of the slow industrial genocide known as the tar sands, has proposed a massive 4,500-kilometre pipeline that intends to stretch across Turtle Island from west to east. Starting in occupied Chipewyan and Cree territories the Energy Beast pipeline is slated to pump 1.1 million barrels of bitumen a day all the way to unceded Wolastoqiyik and Mi’kmaq territories in so-called New Brunswick. The bitumen would meet an Irving Oil refinery in Wolastoqiyik territory in so-called Saint John, NB where it will be shipped by supertanker for international use.

At this time TransKanada is willing to disclose the following about this project:

– They need to lay quite a bit of new pipe. Although a detailed route of the project has not been released, TransKanada has admitted the need to build new pipe all along the route including in so-called Alberta, so-called Saskatchewan, so-called Manitoba, so-called Eastern Ontario, so-called Québec and so-called New Brunswick

– The construction of additional infrastructure required to make the pipeline functional, such as pumping stations and tank terminals. The Energy Beast will also require the construction of “marine facilities that enable access to other markets by ship” 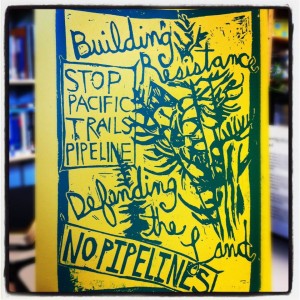 The exact route is unknown and this project is subject to the “regulatory” processes by review boards (such as the NEB) whose mandates are to protect “Kanadian public interest” which is to say the interests of colonialism and capitalism. These review processes do not uphold Indigenous laws, treaty agreements or recognize the true title holders of unceded territories. These “regulatory” processes actively sidestep Indigenous nationhood and represent interests that are not only directly in conflict with our inherent responsibilities as Indigenous peoples, but are upheld at our expense. This project has been proposed by TransKanada as a result of the opposition and resilience of Indigenous nations and peoples in particular, as well as non-Indigenous peoples to various pipeline projects, such as the Pacific Trails Pipeline, Enbridge Northern Gateway Pipeline and the Keystone XL. This proposal is an act of desperation and we will not let them win. 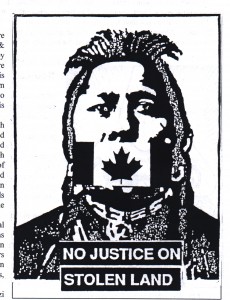 The Energy Beast, which in size and scope makes the Keystone XL look modest, impacts at least over 60 Indigenous communities along its route. From the middle of the plains to the pink rocks along the northern shore of Lake Superior through to the Great Lakes lowlands and into the east coast our territories, lifeways and peoples are being put on the line for industrial capitalism’s greedy thirst for bloody oil. The necessity of this project requires new development on Indigenous territories, including not only pipeline construction, but pumping stations, land and marine terminals and other mega-infrastructure projects along the Turtle’s Back. TransKanada is playing on Kanadian nationalism to see this project ahead as they have already started their campaign to package the true narrative of colonialism behind this project. TransKanada has recently announced it is looking to “delay” its requests to regulatory boards, but if we have learned anything from the Keystone XL it is that TransKanada will not wait for approval to start undermining our sovereignty by clear-cutting our territories and laying their beast into our mother.