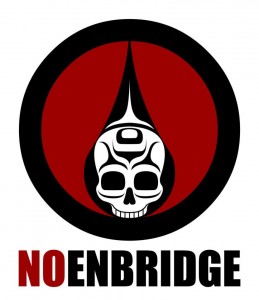 Built in 1976, Line 9 is a 38 year old pipeline that runs in two segments from Aamjiwnaang, Anishinaabek territory near so-called Sarnia, ON to traditional Kanien’keha:ka (Mohawk) Haudenosaunee territory in so-called Montreal. Owned by Enbridge Pipelines Inc., Line 9 was designed to carry crude oil (“conventionally” extracted, ie from an oil well) from west to east and was reversed in the mid-1990s. Line 9 is currently pumping oil across the North shore of the St. Lawrence River, down the Northern shore of Lake Ontario to cross the mouth of Lake Huron and Lake Erie, endangering a huge zone within the Great Lakes watershed.

As the pipeline is divided into two segments and is already in the ground, Enbridge has been able to evade an Environmental Assessment and has completely ignored Indigenous title to lands and totally failed to consult with traditional governance such as the Haudenosaunee Grand Council. This project is both an attack on our territories and an assault on our sovereignty.

In 2011, Enbridge submitted a request to the National Energy Board, a pseudo-judicious body and extension of the occupying nationstate of so-called Kanada, which “regulates” matters related to oil, gas and electricity but essentially rubber-stamps industry proposals. Enbridge’s request was to increase the capacity of their Line 9 by 25% and to again reverse the direction of the pipeline. Enbridge has stated its intention to transport diluted bitumen throughout the territories of many Indigenous Nations without consultation or free, prior and informed consent therefore violating treaty agreements as well as our inherent rights and responsibilities as Indigenous peoples to the lands and waters. 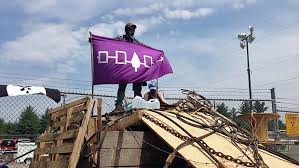 an Onkwehon:we Land Defender at the #SwampLine9 blockade – a 7 day Direct Action Occupation of the Enbridge Westover Pumping Station

The territories of 17 different First Nations communities, violating pre-Confederation treaties adopted by the occupying nationstate of so-called Kanada, as well as violating Wampum Agreements ultimately disregarding completely our inherent responsibilities as Indigenous peoples to live in life-affirming ways with our territories and mother earth. In a time where intergenerational healing from the trauma of colonialism, including residential schools, is so important, and decolonization is a primary focus for many youth – this pipeline project directly continues the legacy of land theft and environmental destruction inherent to colonial-capitalism.

Due to the vicinity of the pipe of the Eastern Great Lakes watershed the potential environmental, cultural and health impacts of the inevitable pipeline rupture(s) will be tremendous. Due to the age of the line, the corrosive nature of diluted bitumen and the higher temperatures and higher pressures needed to transport it – there is great concern about the magnitude of damages to come. The increase in Line9 capacity also requires increased capacity at the Enbridge terminal in “Chemical Valley” less than a few kilometres away from the Anishinaabe community Aamjiwnaang, as well as increasing SunCor’s refinement capacity in Tiotiah:ke, or so-called Montreal, just up-river from Haudenosaunee communities Kahnawa:ke and Kanesata:ke. 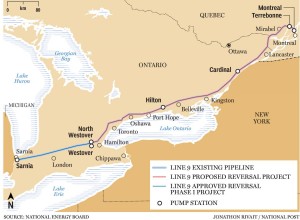 Although the pipeline does not physically cross the South shores of the Great Lakes, pass through the Finger Lakes region, the impacts of a pipeline rupture anywhere along the line will have serious impacts on downstream communities and subsequent water supplies. Contamination of any of the Eastern Great Lakes watershed region will flow into other watersheds and fresh water sources that are fed by those larger bodies, and will directly affect communities on the South shore of Lake Ontario as well as the Finger Lakes region. Line 9A runs from occupied Anishinaabek territory in so-called Sarnia to Six Nations of the Grand River treaty territory in so-called Westover, ON. This segment of the pipeline has already been approved for reversal by the NEB in August 2012. The NEB is currently having “hearings” to give the go-ahead to Enbridge to continue this project. The entire process has been in violation of Indigenous inherent rights & title, and it is up to us to assert our sovereignty. 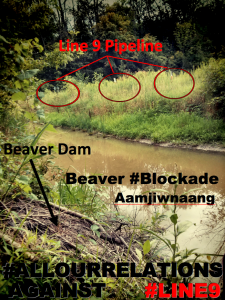 One thought on “Line 9 – Enbridge”